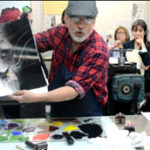 Bruce Waldman has been teaching at the School of Visual Arts in New York City for more than 30 years, and has also taught at the Westchester Center for the Arts and the College of New Rochelle. He exhibits extensively in New York City and beyond. He is a member of The Board of Governors of the Robert Blackburn Printmaking Workshop, and a Director of The New York Society of Etchers. His prints are in the permanent collections of the Metropolitan Museum of Art in New York, The New York Public Library, The Art Institute of Chicago, The New York Historical Society, The Bronx Zoological Museum, The Royal Collection, The Library of Congress, The Housatonic Museum of Art in Connecticut, and The New York Transit Museum.  A founder member of SIPMA Contemporary, Bruce curated our exhibit at the Lemmerman Gallery. 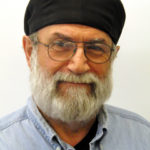 A legend in typography and design, Tony Dispigna partnered with Herb Lubalin in 1973 for several years and ran his own studio, Tony DiSpigna Inc. from Irving Place in NYC.  Tony likes working with his hands and derives great satisfaction from creating pleasing letter forms.  A large part of his output is cursive and calligraphic in nature but his work covers the whole spectrum of type and logo forms.  Tony now works out of THINSTROKE, a studio he co-founded with Bill Hilson, specializing in Corporate Identity and Branding, designing new exclusive typefaces for the international market and are consultants in all areas of communication design. 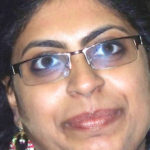 Moutushi Chakraborty is an alumnus of Wimbledon School of Art. She has curated a SIPMA show in Summit NJ for Atlantic Health Care.  Her first solo show was held at the Nehru Center – India High Commission in London in 2002 and her recent solo show in 2012 at Gallery Time & Space in Bangalore.  Moutushi has exhibited widely in her own country and abroad. Her works have been collected by art enthusiasts from world over. Creativity for her is a self-exploratory method of progression and confrontation. Through drawings, prints, paintings and photography Moutushi aspires to convey these sensibilities imbibed from life around. An obsession with ‘form’ garners her attention towards natural entities like stones, plants, shells etc. with which she draws a parallel to the human form. Details like texture, volume and scale heighten this synthesis in her stylistic genre. The artists lives in Kolkata, India with her son who is a huge source of inspiration to her creative pursuits. 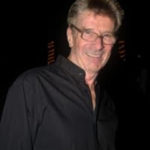 Previously Director and Vice President of the New York Society of Etchers, Late Andy Hoogenboom was born in London.  On completion of his Masters from the Fine Art Hornsey College of Art, London, he pursued a career as an educator having taught in the acclaimed De Montford University.  Mr. Hoogenboom has exhibited internationally with works in many private collections as well as museums including The Metropolitan Museum of Art, NY, The Bibliotique National, Paris, The Museum of the City of New York, The New York Transpot Museum, The Leicester Collection UK, Mildura Sculpture Park Australia.  Andy was an accomplished musician and played with many famous bands including the Rolling Stones.  He was juror for our 2015 show and is remembered very fondly by all his artist peers. 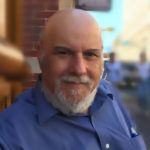 Jeffrey Wechsler , served as head curator at the Zimmereli museum.

Jeffrey Wechsler, the juror of our 2017 show was Senior Curator at the Jane Voorhees Zimmerli Art Museum, Rutgers, the State University of New Jersey, retiring in 2013 after 36 years of service.  He received a Bachelor of Arts and Bachelor of Fine Arts from Brooklyn College, and an M.A. in Art History from Rutgers University in 1975.  Specializing in lesser-known aspects of twentieth-century American art, he has organized well over fifty exhibitions in that field, including Surrealism and American Art, 1931-1947 (1977), Realism and Realities: The Other Side of American Painting, 1940-1960 (1982), Abstract Expressionism: Other Dimensions (1989), Asian Traditions / Modern Expressions: Asian American Artists and Abstraction, 1945-1970 (1997), and Transcultural New Jersey: Crosscurrents in the Mainstream (2004).

SIPMA – Society of International Artists and Printmakers started when a few of our practicing friends came together in 2012, Rajan Fulari (Head of Printmaking Lalit Kala, Bangalore, India) Bruce Waldman – a member of The Board of Govenors of the Robert Blackburn Printmaking Workshop, and a Director of The New York Society of Etchers, Monika Lynn a practicing artist with her own print shop in Beijing, China, with the idea of furthering mutual artistic interests in the global forum.  Based entirely on friendship and mutual interest, SIPMA established itself by organizing shows at the Gramercy Gallery, NYC, Asian Arts Initiative, Philadelphia, Atlantic Healthcare, Summit, NJ, NJCU Art Gallery, Goggleworks, PA and Print Making Center of New Jersey in 2017.  Artists and curators and educators flow through the virtual open doors of SIPMA making their mark and continue on in their paths.